CHILDREN are a gift from God. Whether they come in singles, twins, triplets or quadruplets, they are priceless.
Dec 31, 2020 11:47 PM 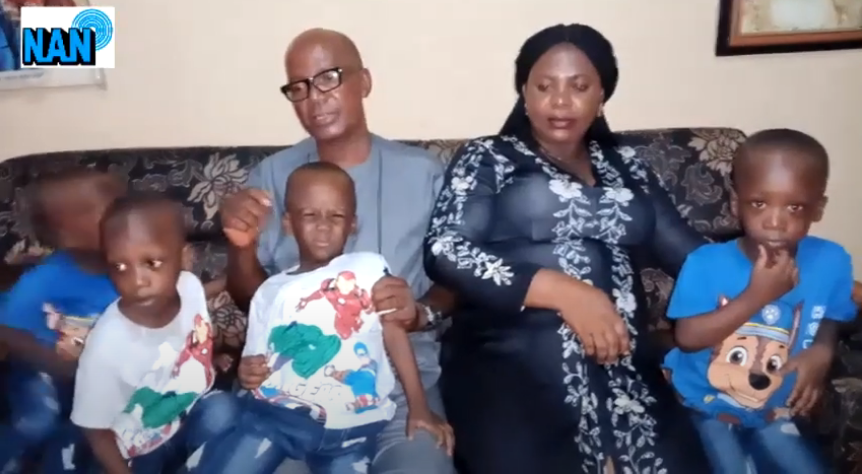 CHILDREN are a gift from God. Whether they come in singles, twins, triplets or quadruplets, they are priceless. Such is the blessing to Mr Peter Ejiofor, a Deputy Editor-in-Chief with the News Agency of Nigeria (NAN) and his wife, Anastasia, who welcomed their all boys quadruplets three years ago, after seven years of marriage.

The couple who reside in Ipaja, Lagos State, are still excited at the set of gifts, who arrived on December 28, 2017.

At the third birthday anniversary celebration of his quadruplets on Tuesday in Lagos, Ejiofor described their birth as a miracle, but said that it had not been easy caring for them.

Ejiofor told NAN that catering for quadruplets at the moment was challenging due to the present economic situation.

He said that adequate care for them would require much assistance.

“For seven years,  we never had a child.

"Everyone around us knew we had waited to have our own. When we finally did, it was a miracle because they came in quadruple.

“However, it has not been rosy, there are challenges.

“It is not easy to raise even twins, but we thank God for family members and friends who have been contributing for their upkeep.

“When they were born, Lagos State Government under former Gov. Akinwunmi Ambode, through his wife, visited and gave them gifts including clothes and money,” he said.

Ejiofor said that his sisters in the United Kingdom, Pastor Amaka Ike and Mrs Ngozi Ogbonna, began to make provisions for the quadruplets when they were in the womb.

“They are still contributing for their upkeep.

“Also, I must thank Mr Mike Mbonye, a NAN  retired Director and close friend, who has been rendering help in many ways.

“He took it upon himself to provide cake for them every year on their birthday anniversary celebration,” he said.

Ejiofor, who is set to retire from public service in 2021, said that his family had been making plans to secure the future of the children.

“Considering the situation of the country and the fact that I will be retiring from service in February 2021, we have been working hard to invest in their future.

“This is to ensure that they will have something to rely on for education, sustenance and general growth,” he said.

He, however, appealed to family members,  friends and kind-hearted Nigerians to continue to support him and his wife in raising the boys.

“They are growing and their demands are increasing.

“We are appealing for support in securing a better future for them,” he said.

Commenting,  the mother of the quadruplets, Anastasia, said that the COVID-19 pandemic had made taking care of the children very overwhelming.

“It has not been easy, especially with the COVID-19 pandemic. When they clocked two years, we put them in school, but because of the pandemic, schools were closed.

“Since then, I have been going to work on alternate days to have time to take care of them,” she said.

She advised families facing hardship to rely on the Almighty for help.

“God who gave them the children will raise help as He has been doing for us.

“This Christmas, many people gave us gifts, we are grateful to all those who have been supporting us. God bless them,” she prayed.