ABESAN Housing Estate Residents Association has pleaded with political leaders and the All Progressive Congress not to represent the incumbent Chairman of Mosan-Okunola Local Council, Honourable Olabisi Adebajo, after accusing her of various atrocities during a press conference that held at their Secretariat recently.
May 1, 2021 2:52 PM 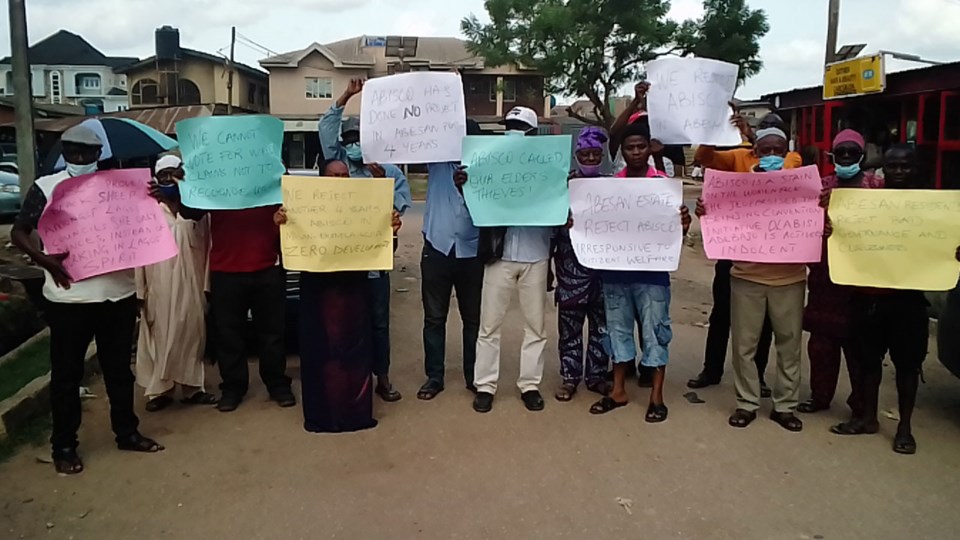 The Association alleged there is no project carried out in Abesan by the chairman in the last four years. This, they noted will not repeat itself for another four years.

The community is therefore asking those responsible for fielding candidates in APC and other parties not to field her or they will fail woefully. Some of the inscriptions on the placard read, “ Abisco Has done no project in Abesan for 4 years”, “We cannot vote for who claims not to recognize us”, “Abesan Estate reject Abisco", among others.

“We are today telling the whole world, the political leaders not to re-represent the outgoing Chairman, Olabisi Adebajo (Abisco) as a candidate for the forthcoming local government election”, the president, Elder M.A.O Kehinde said.

“The crisis we are having in this Estate now as regards insecurity can be traced to her as the one who laid the foundation. She imported all the motorcycle riders (Okada) here, encouraged them to continue to ride without any control. Severally, they have wounded people. This week one of the motorcycle riders was caught with a sophisticated weapon. All these we thought we could put under control when we were asking for profiling of transporters in our Estate. She refused bluntly and said nobody could profile anybody, thereby encouraging lawlessness and thuggery in our Estate.

"We, the residents are saying that Abisco should not be re-represented again as a candidate in the forthcoming election.

"I saw her over the TV yesterday, claiming that she did some projects in this Estate. That is a blatant lie. The fifth avenue she claimed to have rehabilitated is still there as it has been. We wrote her on the avenue before on its deplorable state about a year ago, and yet she did not and has not done anything in the area.

"We took pains to write the Lagos State Public Works Department and attached the deplorable state of all our roads. In consequence, the Lagos Public Works Department came to rehabilitate some roads in our Estate and she started claiming the credit. We are telling everyone that she lied because we have handy our letter of appeal dated 17th August, 2020 that led to the rehabilitation. If she wrote any letter, we challenge her to present same.

"We have written series of letters to the governor, commissioners, without any response. The only response we had was from the Task Force at Oshodi. They came, they saw our situation and were ready to help until Abisco hindered them. She drove away the security we put at the gate. The gate is now porous. We employed security and were paying without asking her to pay, yet she drove them away.

"She opened up Estate for danger and insecurity. We wrote to Commissioners for Local government, Works, and to the Speaker of the House of Assembly over our plight without any response from them. Not a single response. We have all our acknowledgement copies.

"We are using this medium to tell the leadership of APC in Mosan Okunola LCDA and those in this Estate that Adebajo should no longer be presented as the Chairman of this area.

"We are telling the governor to intervene and ensure that Mrs. Adebajo is not re-presented as a candidate,” he submitted.

Oluwaseun Olukoya, representing the youth, Abesan Estate residence Association in his interview said his main focus is on welfare and security.

“Motorcycles are too many and they are giving us, the residents in Abesan sleepless nights. Last week, a friend boarded a one chance vehicle within this Estate and was robbed of over N641,000 from his two accounts. And yet, we have a Chairman. We cannot sleep with our two eyes closed. Other Jakande Estates are being taken care of by the Residents Association. But here, the Chairman would not, rather, she called our elders thieves and rogues. She should show us what she has done. People are not happy with APC and she should not be fielded. If she is fielded, it will be woeful. Alimosho used to be the biggest local government before it was split into six but we are yet to enjoy any development here. We need a change of a Chairman that would be closer to us not the type of this woman. We are not just saying we are leaders of tomorrow but of today”, he said.