The Lagos State Government has concluded plans to review the State’s Child Rights Law, 2015, just as it emphasised the need for children to know their rights early in life.
Dec 16, 2020 1:20 PM By: Josephine Kolawole 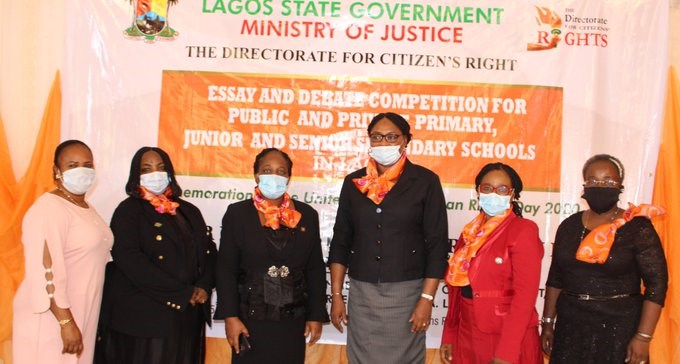 The Lagos State Government has concluded plans to review the State’s Child Rights Law, 2015, just as it emphasised the need for children to know their rights early in life.

The Solicitor-General/Permanent Secretary, Ms. Titilayo Shitta-Bey, stated this in her address at the Essay and Debate competition organised for school pupils as part of activities to celebrate the Y2020 Human Rights Day with the theme “Recover Better, Stand Up For Human Rights”.

In this competition where the pupils of the Doregos Private Academy won the first runner-up position, pupils of the Ayedere Ajibola Senior High School emerged winner of the drama category.

Ms. Shitta-Bey said that Human Rights Day is observed globally to educate people on their rights as enshrined in the Constitution saying, "for the children, we have legislation, the Child Rights Law and they need to know about their rights".

The Director, Directorate for Citizens Rights, Mrs. Oluwatoyin Odusanya, explained that the review became necessary to fill the gaps in the law and ensure that the rights of children are protected, reiterating the importance of teaching about human rights.

The Guest of Honour at the event, Chief Magistrate Kikelomo Ayeye, in her keynote address titled; “The Role of the Judiciary in Safeguarding the Rights of a Child”, noted that the judiciary has the duty of protecting the rights of the children due to their vulnerability.

While urging the state government to increase the budget allocated to the Ministry and Agencies working to protect children and those that are vulnerable, Ayeye noted that the failure to attend to the needs of the children would be disastrous for the nation.