THE Ottasolo U15 Football Competition, an initiative for grassroots teams in Lagos, will kick off tomorrow at Idowu Fadeyi Field, Ayobo, Lagos.
Nov 20, 2020 4:26 PM By: Oluwafunmilayo Daramola 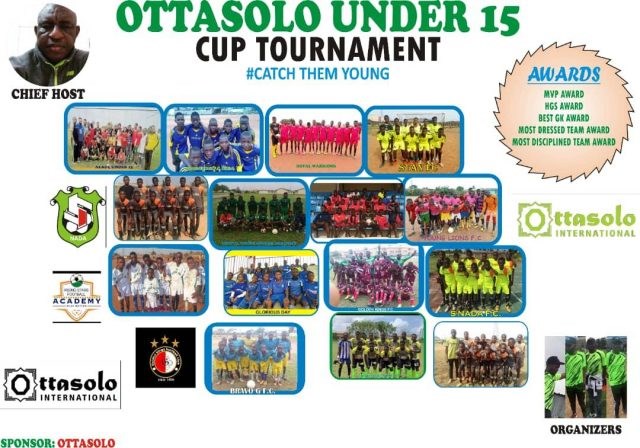 The Ottasolo U15 Football Competition, an initiative for grassroots teams in Lagos, will kick off tomorrow at Idowu Fadeyi Field, Ayobo, Lagos.

The first edition of the competition will see 20 Grassroot teams in the state accredited to participate in the tournament billed to kick off on November 21.

According to the Chairman of Ottasolo International, Gabriel Davies, the gesture is aimed at giving back to society.

"We want these kids to embrace football because the game brings people together. It's my dream for these boys to see the sport as a means of livelihood.

"The aim is to make the U15 competition continue to grow from strength to strength. There would be a lot of side attractions to entertain fans.

"We have sponsored numerous projects. So, we are committed to sponsoring this initiative for as long as possible," he added.

He further said that aside empowering youths in the state, this would help to discover talents that would, in turn, make the state and nation proud in terms of performance on the pitch, club football and international fixtures.

Hon. Yusuf presents vehicle to Olu Ipaja
Nov 18, 2020 4:58 PM
Comments
We welcome your feedback and encourage you to share your thoughts. We ask that you be respectful of others and their points of view, refrain from personal attacks and stay on topic. To learn about our commenting policies and how we moderate, please read our Community Guidelines.