A Non-Governmental Organisation, Lift Above Poverty Organisation (LAPO), has urged the government to provide cancer treatment support for indigent individuals due to the high cost of managing and treating the ailment.
Feb 11, 2021 8:40 PM 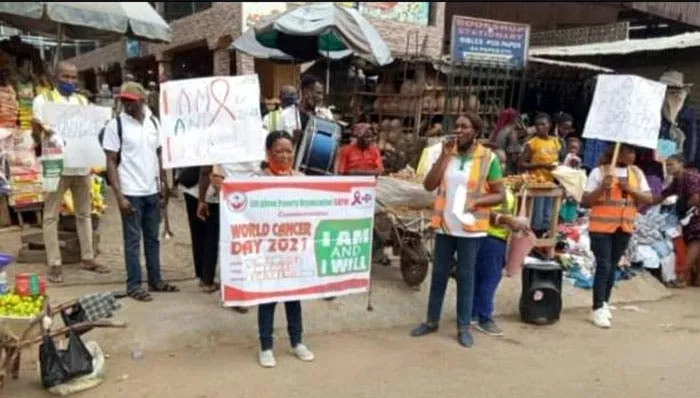 A Non-Governmental Organisation, Lift Above Poverty Organisation (LAPO), has urged the government to provide cancer treatment support for indigent individuals due to the high cost of managing and treating the ailment.

Mr Honestus Obadiora, the group's Executive Director, made the call during a sensitisation and awareness rally organised by LAPO in Igando, Lagos State.

Obadiora, who was represented by Mrs Sandra Asowata, Head, LAPO NGO, Western Region, said the awareness, which was centred on Cervical, Breast and Prostate Cancer, was part of activities to mark the 2021 World Cancer Day.

Obadiora noted that LAPO was committed to the empowerment of poor and vulnerable people in Nigeria through the implementation of innovative financial and non-financial development programmes.

According to him, the organisation believes that poverty is further reinforced by diseases and vice versa and has therefore been involved in community health improvement across the country.

“As a development organisation, LAPO is concerned that cancer is now a major cause of morbidity and mortality in Nigeria with over 100,000 persons diagnosed every year of which about 80 per cent die due to late detection.

”Globally, 9.6 million people die from cancer every year even though over 80 per cent of cancer cases are preventable with early detection while 40 per cent of the disease can be eradicated by lifestyle changes.

“In 2016, the LAPO Community Campaign for Cancer Control (LAPO-C4) project was initiated by the Founder towards preventing and mitigating cancer-related deaths in Nigeria.

”The main focus of the project is mass awareness creation, basic screening services for the detection of pre-malignant conditions and building referral linkages for the uptake of medical services,” he said.

Obadiora said the project was being implemented in collaboration with six Community-Based Organisations (CBOs) across Lagos, Edo, Imo, Abuja and Rivers State.

He said between November 2016 and December 2020, LAPO created mass awareness about cancer in target communities across the country under the LAPO-C4 project.

”We appeal to well-meaning individuals and corporate organisations to support LAPO in the implementation of cancer prevention and Maternal and Child Health projects in the country. We need your commitment to creating a cancer-free world,” Obadiora added.