“Government needs revenue to take care of the people and our people are not paying their dues. These bills will empower the government to help the people.”- Hon. Mojisola Badmus, Vice-Chairman
Ayomide Eweje
Jan 13, 2022 11:10 AM

THE Legislative Arm of the Igando-Ikotun Local Council Development Area (LCDA) has, on Tuesday, January 11, 2022, held a public hearing with stakeholders in the community over proposed bills and bye-laws at the council secretariat’s hall. 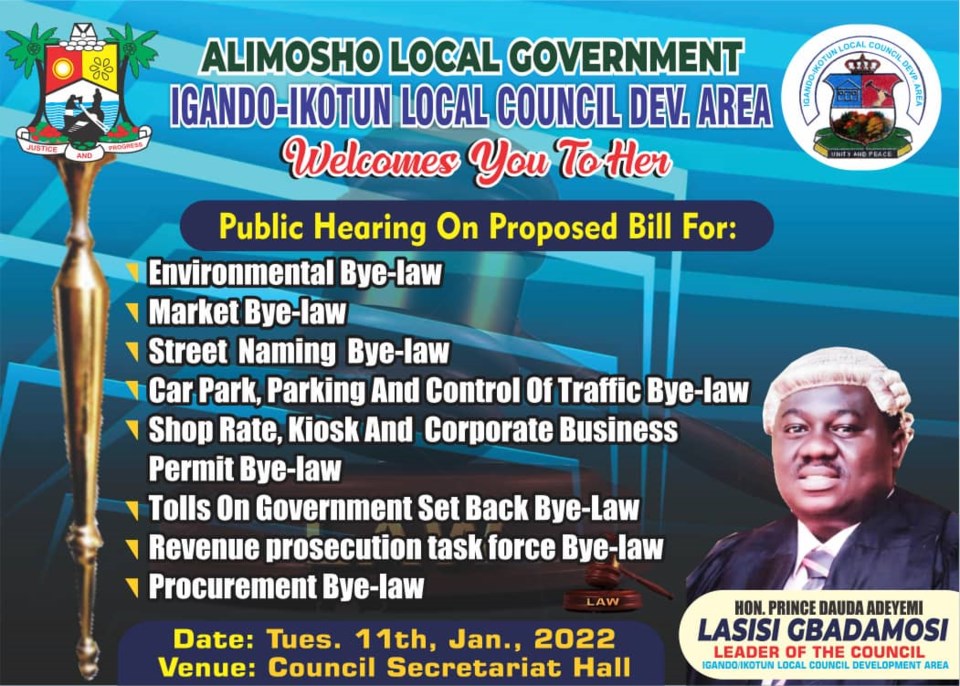 While speaking during the event, the Council Mayor, Comrade Akinsanya, affirmed that local governments, as the third-tier of government, are empowered to make bye-laws for the smooth administration of their jurisdiction. He also mentioned that the proposed bills are aimed both at regulating affairs in the council as well as to generate revenue to facilitate infrastructural development in the LCDA and improve the standard of living of the people.

The Vice-Chairman, Hon. Mojisola Ayinke Badmus, on her part, reiterated that; “Government needs revenue to take care of the people and our people are not paying their dues. These bills will empower the government to help the people.”

Meanwhile, Hon. (Prince) Dauda Adeyemi Gbadamosi, the Legislative Leader of the House, has added that the public hearing was to enable the council authority come up with inclusive and comprehensive bye-laws by giving the public the opportunity to make their contributions.

He has, therefore, urged the residents of the council area to adhere to the new laws, adding that contraventions would attract stiff fines and penalties.

SEASON'S GREETINGS: AlimoshoToday.com staff express gratitude to Alimosho at large
12/20/2021 4:48:00 PM By: Dupe Akinola
This is not a news story. This is our heartfelt gratitude to our readers home and abroad who believe in us to choose to stay with us. Thank you. Merry Xmas and A Prosperous Happy 2022. More >