Lagos govt. to embark on youth development projects in 2021

Lagos State Government has assured youths in the state that it would embark on meaningful projects aimed at enhancing their living standards next year.
Dec 30, 2020 12:51 AM 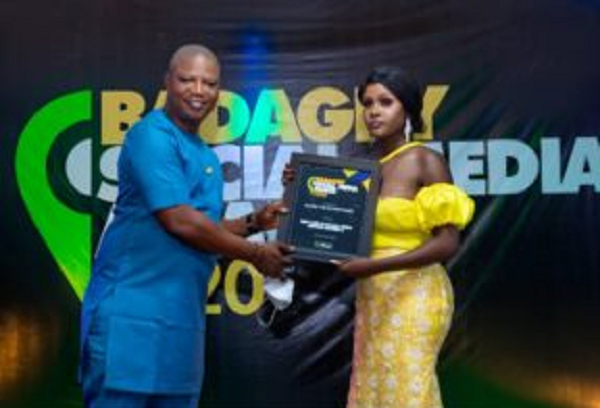 Mr Solomon Bonu, Special Adviser to Gov. Babajide Sanwo-Olu on Tourism,Arts and Culture, presenting an award to Miss Bukola Agemo, one of the awardees at the 2020 Badagry Social Media Event on Tuesday.

Lagos State Government has assured youths in the state that it would embark on meaningful projects aimed at enhancing their living standards next year.

Mr Solomon Bonu, the Special Adviser to Gov Babajide Sanwo-Olu on Tourism, Arts and Culture, gave the assurance at the 2020 Badagry Social Media event that took place in the town on Tuesday.

According to Bonu, the state government is coming up with so many meaningful projects for the development of youths in Badagry.

“There are lots of programmes being projected by the state government in 2021 which youths in Badagry can tap into.

“At present, we are going round the State to check the condition of some of the Youth Development Centres.

“Most of the abandoned youths centres will be rehabilitated. For example, the Federal Government Youth Centre in Ajara, near Ibereko and the mini-stadium in Gayingbo, near Gbaji, will be renovated for use.

“This has not been happening in the past, but now, Badagry youths are coming up with ideas, this is why the state government wants to project Badagry to the whole world,” he said.

The governor’s aide commended the management of Citymood Magazine, organisers of the social media event, saying, “this is the pride of Badagry event, and Citymood has been doing it greatly."

In his remarks, Mr Samson Apata, the Supervisor, Environment and Tourism in Badagry Local Government, said there was need to create more contents to promote tourism in the town.

Apata said that the event had brought people together to enjoy themselves.

Also, Chief Doheto Mesi, the Vice-Chairman, Friends from Cradle Foundation, who was honoured with the COVID-19 Hero Award, said he was delighted to receive the honour on behalf of his association.

“If you are doing something in the dark, you won’t know some people are watching you.

“We extended our assistance to frontline workers in Badagry General Hospital during the first wave of the COVID-19 pandemic and this is the reward we are getting,” Doheto said.

Commenting, Mr Sewhude Akande, Publisher of Citymood Magazine, said the event was meant to honour those that were using the social media constructively.

“If you look at the last #EndSARS protest, there were lots of fake news and misconception; just as social media is a powerful weapon, we understand that people can misuse the weapons.

“In 2019, we decided to recognise those that were using social media constructively and creatively so that we can maximise the potential of social media space in all areas of human endeavour,” Akande said.

He said the awardees were selected by popular votes, adding that Citymood management streamline the population.

“We strictly adhered to all directives of the Lagos State Government and health agencies on COVID-19.

“People are washing their hands and using sanitisers, and we don’t allow anyone without face masks in,” he said.

Badagry Local Government won the Best Use of Social Media (Government), among others winners.