THE governor of Lagos State, Mr. Babajide Sanwo-Olu, has rewarded all Team Lagos Athletes who won medals at the Abuja 2018 National Sports Festival in fulfilment of his promise to Athletes, who did the State proud at the National Tournament under the last administration.
Apr 5, 2021 2:16 PM 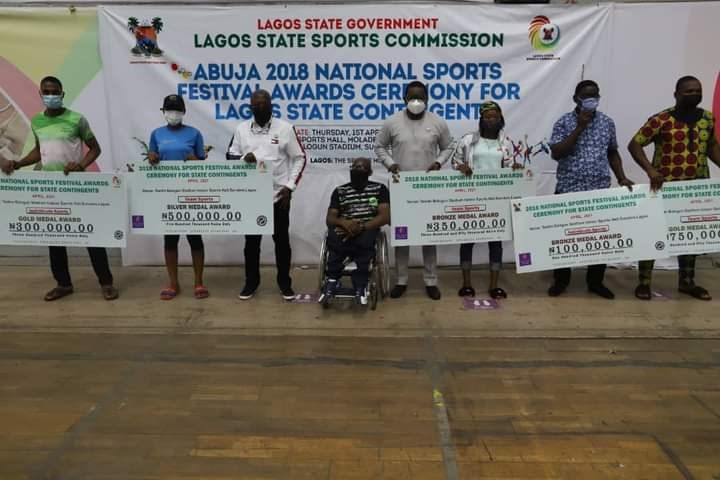 Speaking during a brief ceremony held at the Molade Okoya-Thomas Indoor Sports Hall, Teslim Balogun Stadium, Surulere, on Thursday, the Honourable Commissioner for Youth and Social Development, Mr Segun Dawodu, noted that the State government is fulfilling the promise made by the previous administration to the athletes because governance is a continuum.

He assured that Governor Babajide Sanwo-Olu's administration will continue to render necessary support to the Lagos Team, urging them to improve on their performance at the forthcoming National Sports Festival in Edo State and saying, "I believe this act will put your mind at rest. This Government will continue to reward good performance. We urge you to put in your best when you are representing our dear State”.

The Executive Chairman, Lagos State Sports Commission, Mr Sola Aiyepeku, thanked Governor Babajide Sanwo-Olu for redeeming his promise to the Athletes, adding that the Governor's gesture was done due to his passion for Sports and recognition of good performance.

He said the State Government had, on several occasions, shown its commitment to honour and reward great achievements by its athletes at all times.

The Director-General, Mr Oluwatoyin Gafaar, said that the gesture was in pursuance of the spirit of continuity which the incumbent Lagos State Government is known for, disclosing that Governor Sanwo-Olu graciously approved the rewards for the Abuja 2018 medal winners to serve as motivation for Team Lagos as they set out for the 20th National Sports Festival in Edo State starting this weekend.

"What we are doing today shows that any promise made by Mr Governor will always be kept it. There is a reward for loyalty, excellence and achievements in Lagos State," Gafaar stated.

He also revealed that Governor Babajide Sanwo-Olu has approved a special package for all members of Team Lagos who have qualified to represent Nigeria at the coming Olympics in Japan this July.

According to him, “Mr Governor has magnanimously approved N2.5 Million for each of the athletes in Team Lagos that has qualified for the Olympics. This is to support their preparations. I, therefore, urge the athletes to continue to improve on their performances for our dear State, Lagos”.

The Athletes of Team Lagos, who came fourth overall at the Abuja 2018 with 146 medals comprising of 36 gold, 37 silver and 73 bronze medals, were rewarded as follows: Gold Medal winners received N750,000; Silver Medalists were rewarded with N500,000; while Bronze Medalists collected the sum of N350,000.